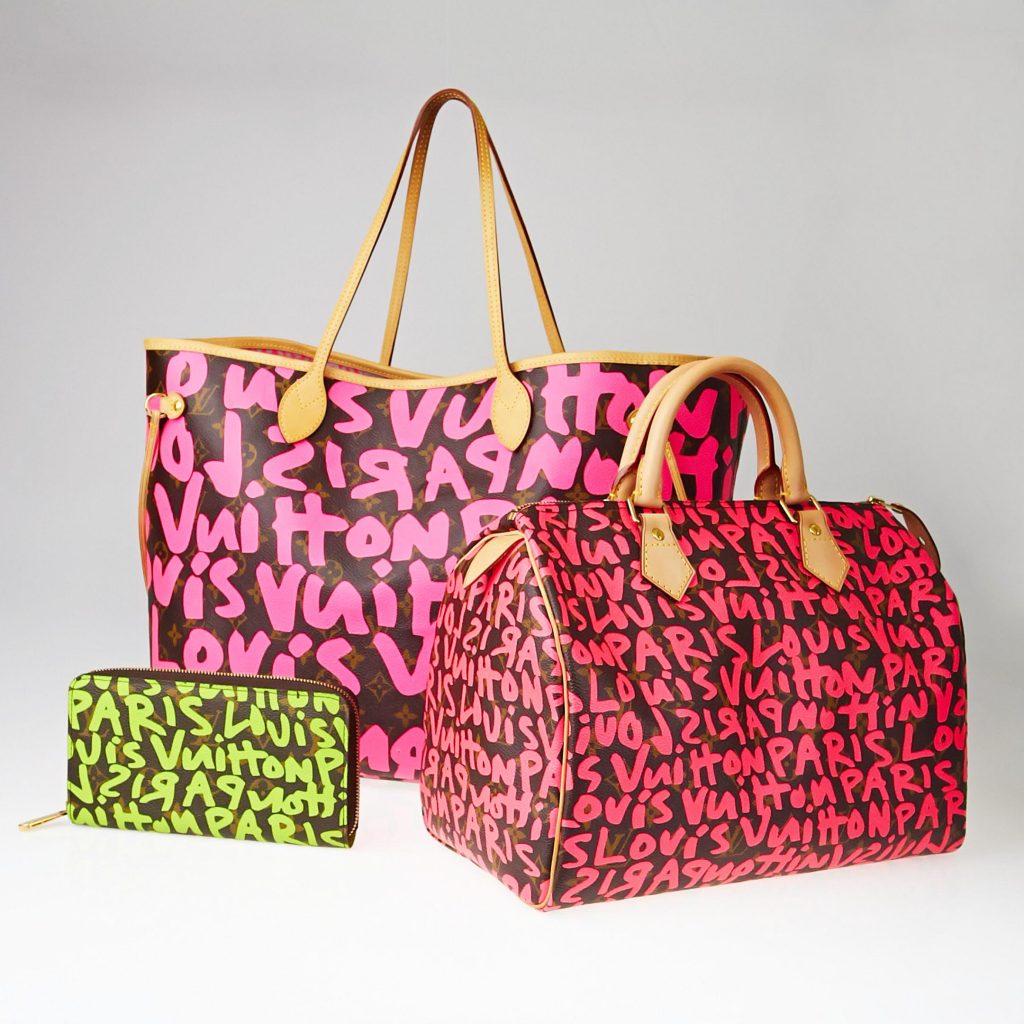 Louis Vuitton has a long history of pairing with stars of the art world to create artwork we’re proud to carry; in fact, they basically invented it. Louis Vuitton’s most recent collaboration is with streetwear kings Supreme and fine artist Jeff Koons. Just like artwork, these collaboration pieces increase in value–often selling at or above their original retail price for years after their original release due to their exclusive nature. We’ve turned heads with a Louis Vuitton Graffiti Neverfull and captured hearts with the Takashi Murakami Cherry Blossom Papillon, but which cult art collaborations are our favorites? 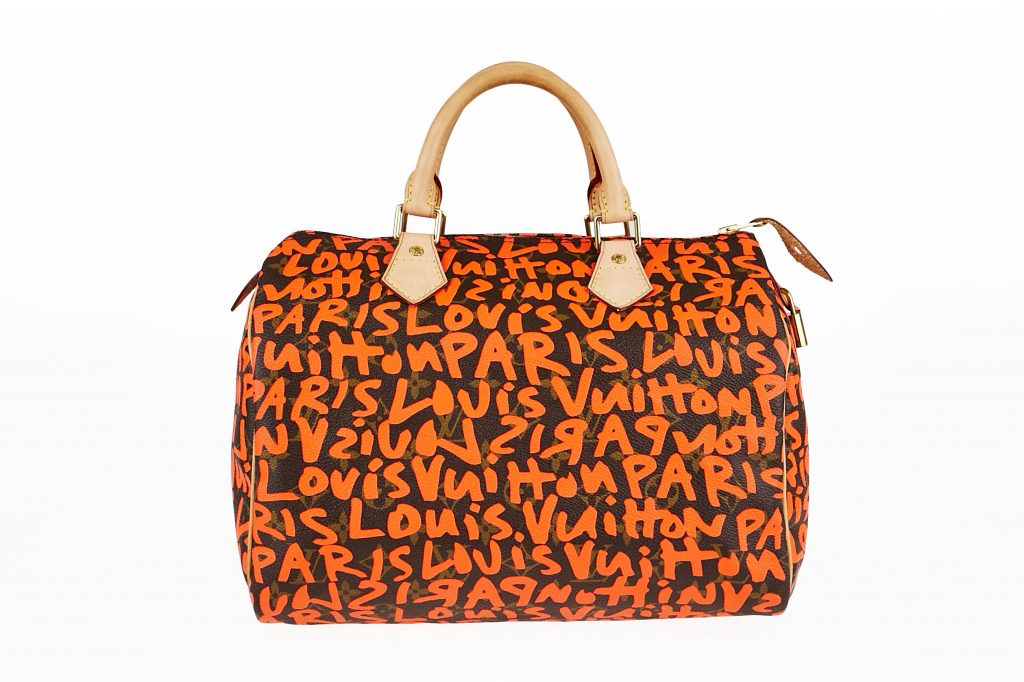 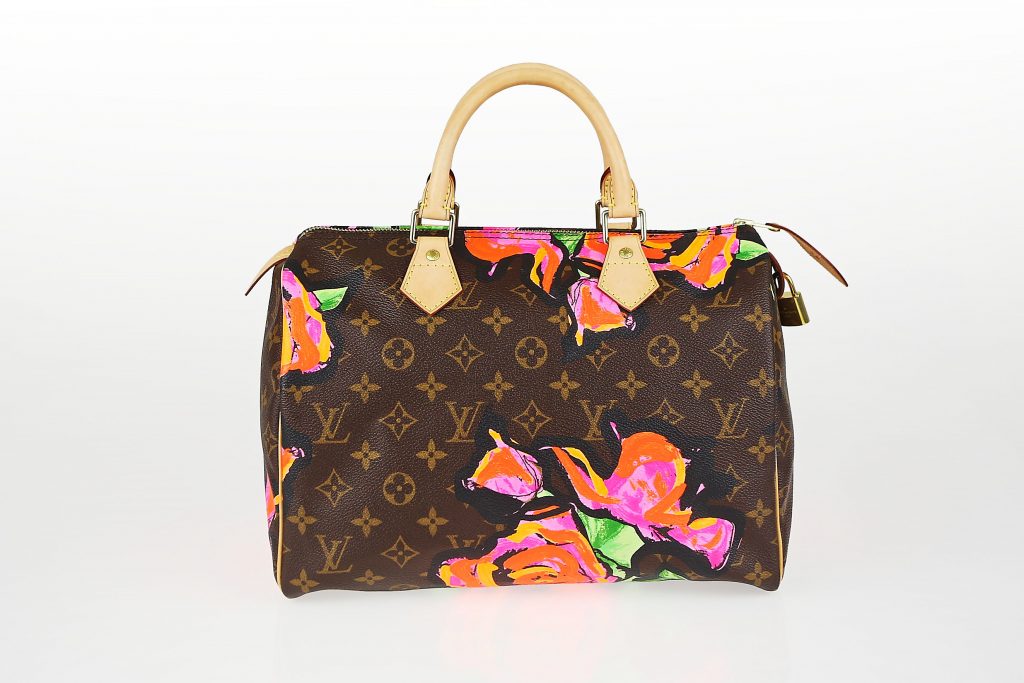 The Louis Vuitton Stephen Sprouse Roses collection features 1980s-inspired Day-Glo pink, green and orange abstract roses on wallets, handbags and scarves. This rare limited edition collection pays homage to Sprouse, who died of lung cancer in 2004. From this streetwear-inspired collection, Louis Vuitton released glow-in-the-dark, graffiti-tagged Velcro high tops, mask-style sunglasses, scarves, pumps, ballerina flats, along with Monogram Keepall luggage, Speedy bags, Neverfull bags and coin purses. The Roses collection features some of our favorite bags ever and still fetch top dollar on the pre-owned market…if you can get your hands on one! 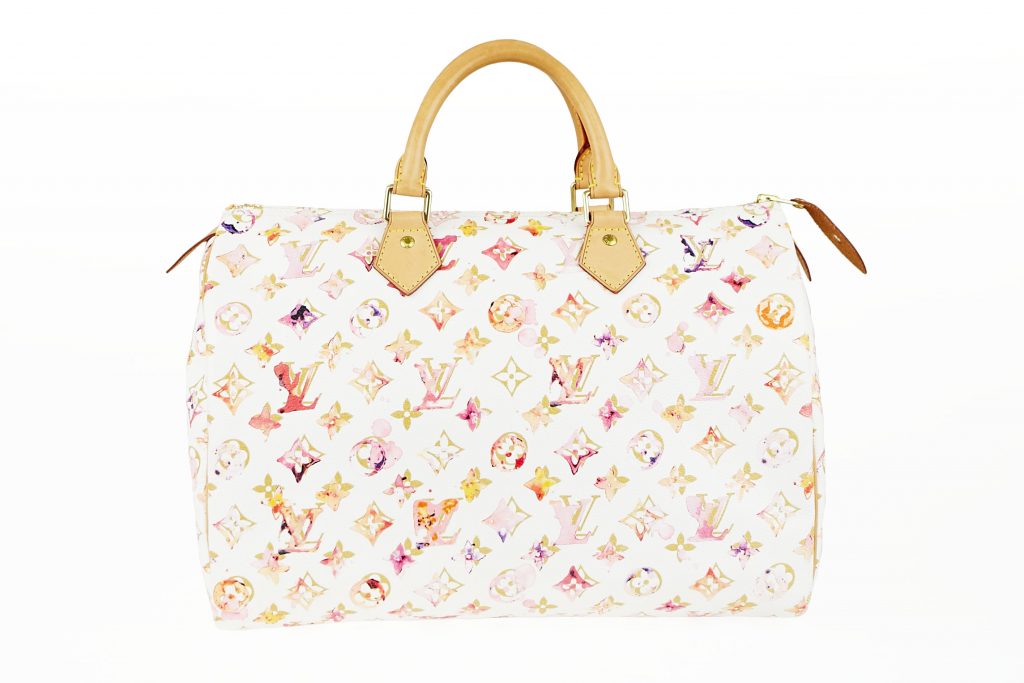 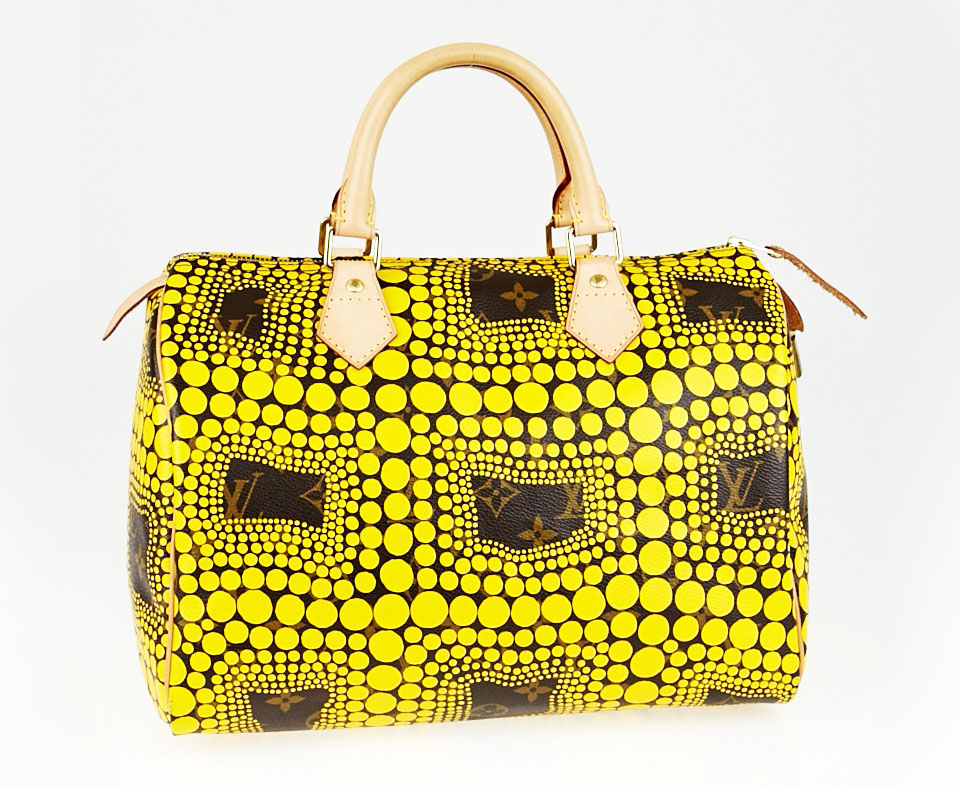 Yayoi Kusama is known in the art world for her obsession with dots. As expected, they’re covered in variety of polka dots in multiple bright colors. Yayoi Kusama designed several versions in her collaboration, including Monogram Vernis Wave (Dots on Monogram Vernis), Pumpkin Dots, and our favorite, Monogram Town, which features the classic Monogram canvas with a stunning overlay of colorful dots. 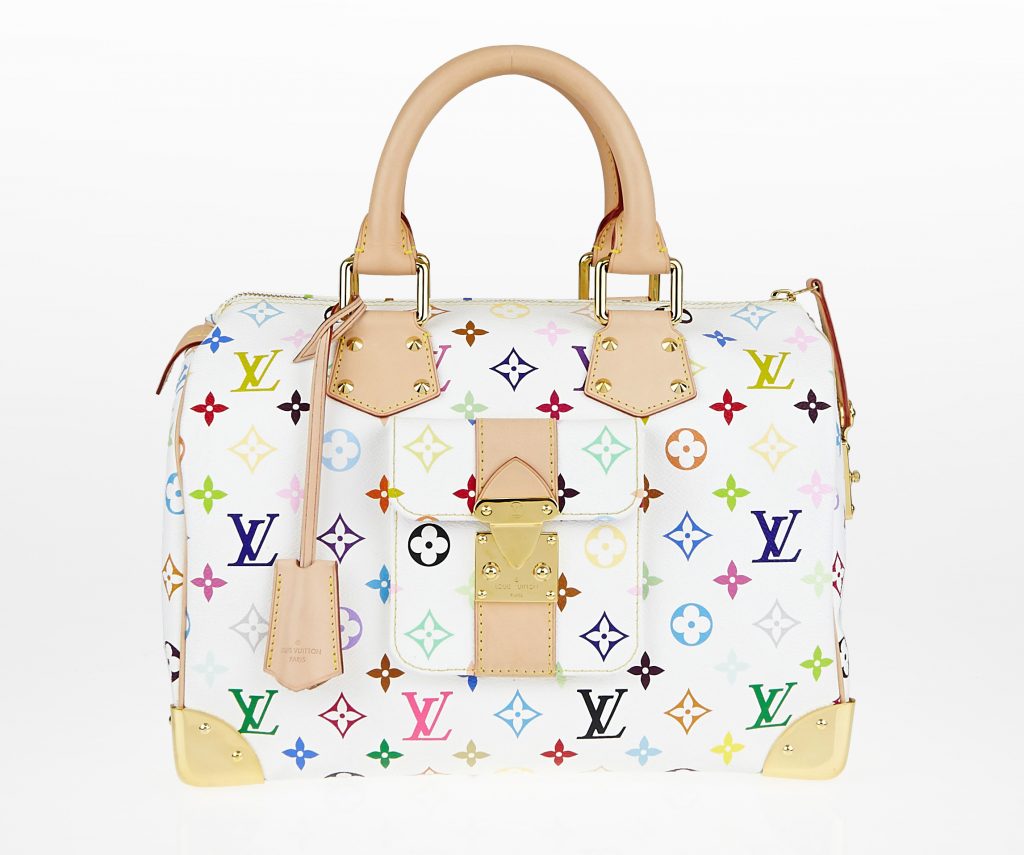 Takashi Murakami brought a breath of fresh air when he redesigned Louis Vuitton’s Spring/Summer 2003 accessories collection using a vivid color palette and playful style that he’s known and loved for. It might be a little known fact that this started as a collaboration with these now super popular multicolor bags. Sometimes hailed as the “beginning of the It bag,” these bags were a mainstay of the early-2000s ?and we still can’t get enough of these multicolor pieces. Now discontinued, Yoogi’s Closet is the perfect place to find one. 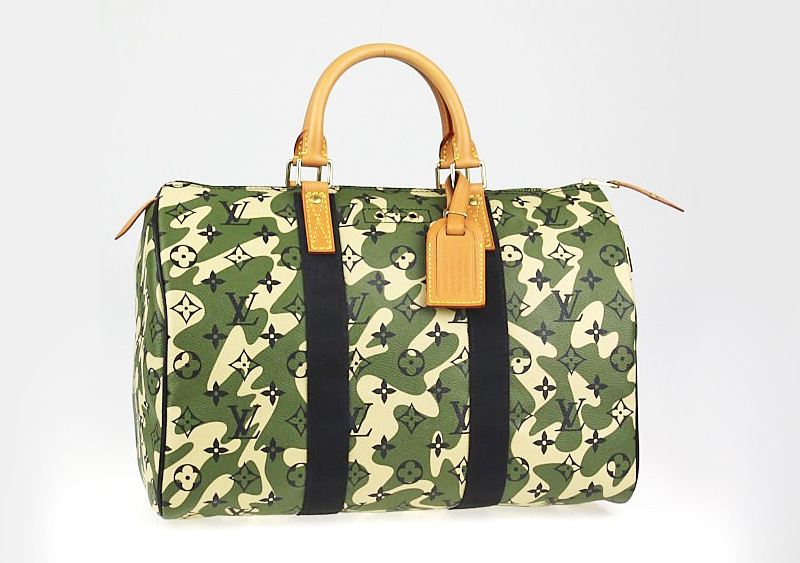 What do you get when you combine the classic Monogram print, camouflage print, and urban streetwear? Monogramouflage, of course. This controversial bag has been a favorite of ours for years for its cheeky, utilitarian-inspired play on the monogram print, which was reversed to black and covered in military green camouflage. The Monogramouflage collection was original sold at the Brooklyn Museum, creating an intersection of high fashion into fine art, which Louis Vuitton continues to do today with its Masters Collection. 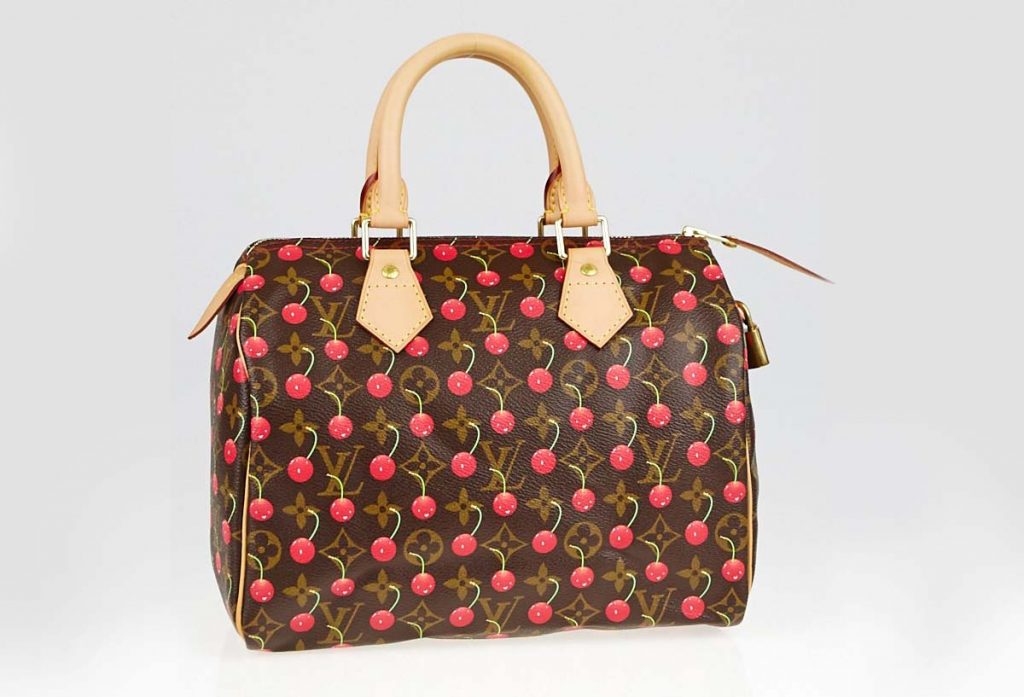 The Louis Vuitton Monogram Cerises Line is a limited edition collection from Spring/Summer 2005. The Japanese pop artist Takashi Murakami used 15 different pigments to obtain the bright red of the cherries and their smiling expressions of laughter and surprise. It’s just so cute! 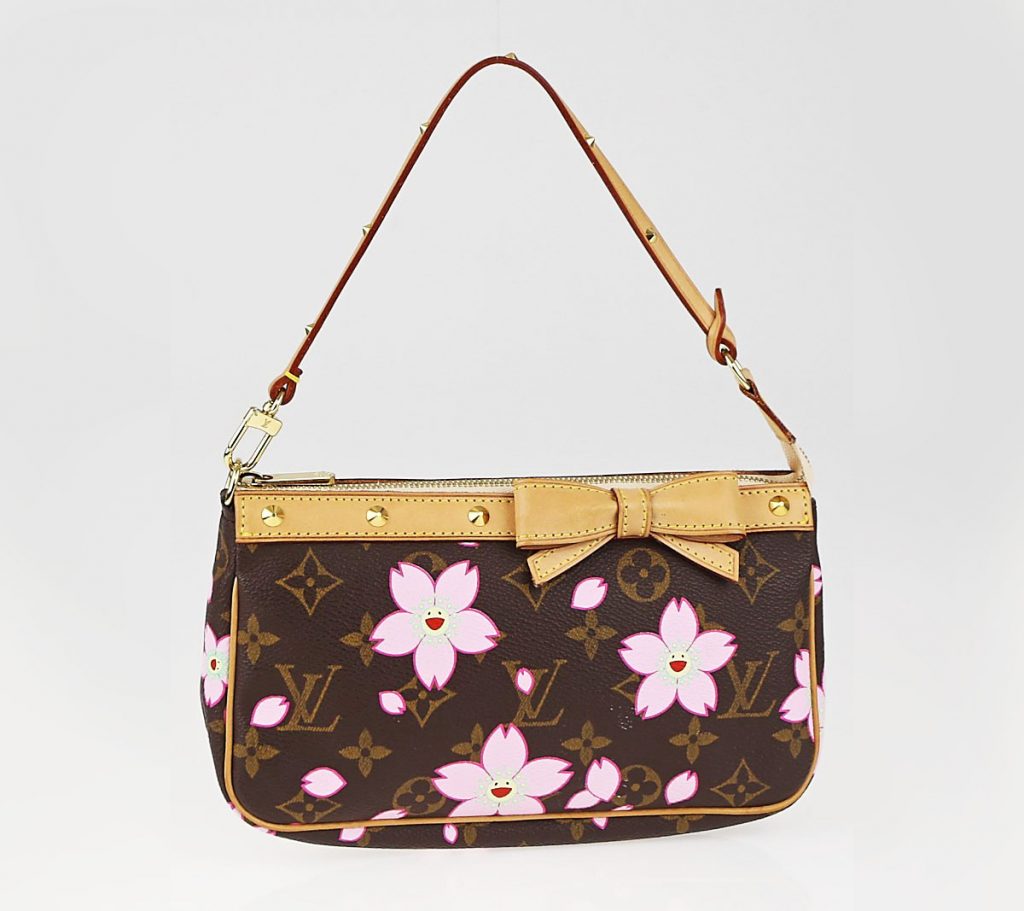 Japanese pop artist Takashi Murakami wanted to give some freshness and cheerfulness to the iconic monogram pattern–and the Cherry Blossom collection was planted. Takashi Murakami’s cherry blossom flower became a hallmark of his work, representing Murakami’s Japanese heritage and resembles the Kawaii-pop-art style he was known for. The Cherry Blossom collection featured the LV all-over logo print with the flower design, featuring a tiny smiley face at the center. Unlike most other limited edition collections, Louis Vuitton never produced a Speedy in the Cherry Blossom print. 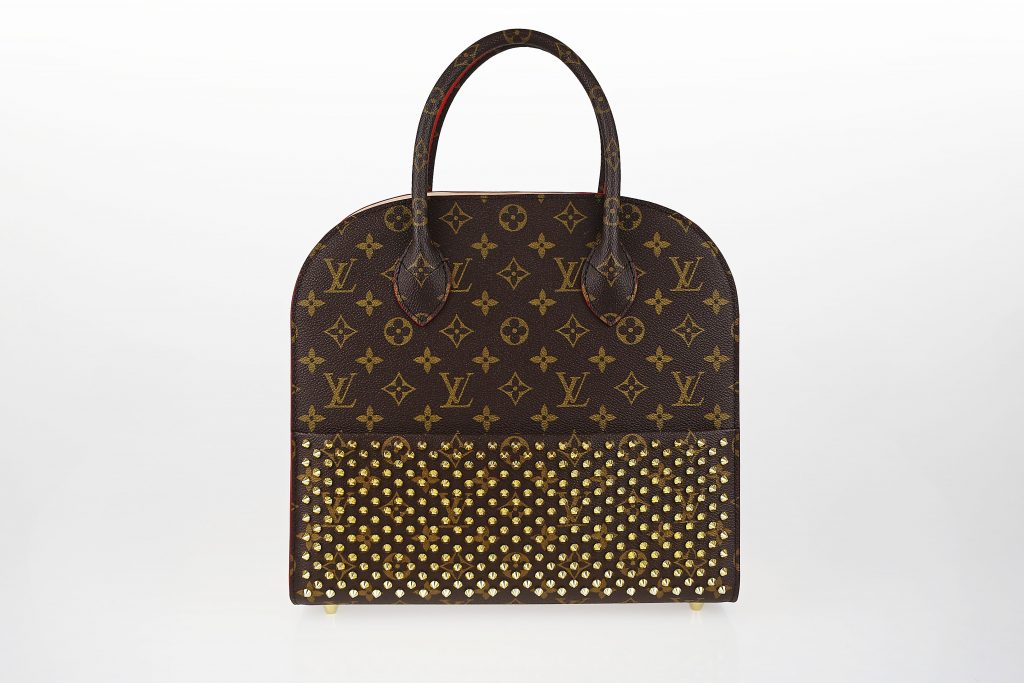 In keeping with Louis Vuitton’s spirit of innovation and collaboration, Karl Lagerfeld, Rei Kawakubo, Marc Newsom, Cindy Sherman, Frank Gehry, and Christian Louboutin were given free reign over Louis Vuitton’s Monogram pattern to create inspired pieces for the “Celebrating Monogram Collection”. Our favorite bag from the Celebrating Monogram Collection was designed by Christian Louboutin, who is known in the fashion world for his red-soled shoes and daring designs. The Shopping Bag pairs the iconic Monogram with goldtone studs, an eye-catching red calf hair back panel, cowhide vachetta leather sides and a giant leather bow, complete with bright red glazing throughout. It’s a practical yet modern take on our favorite Monogram. 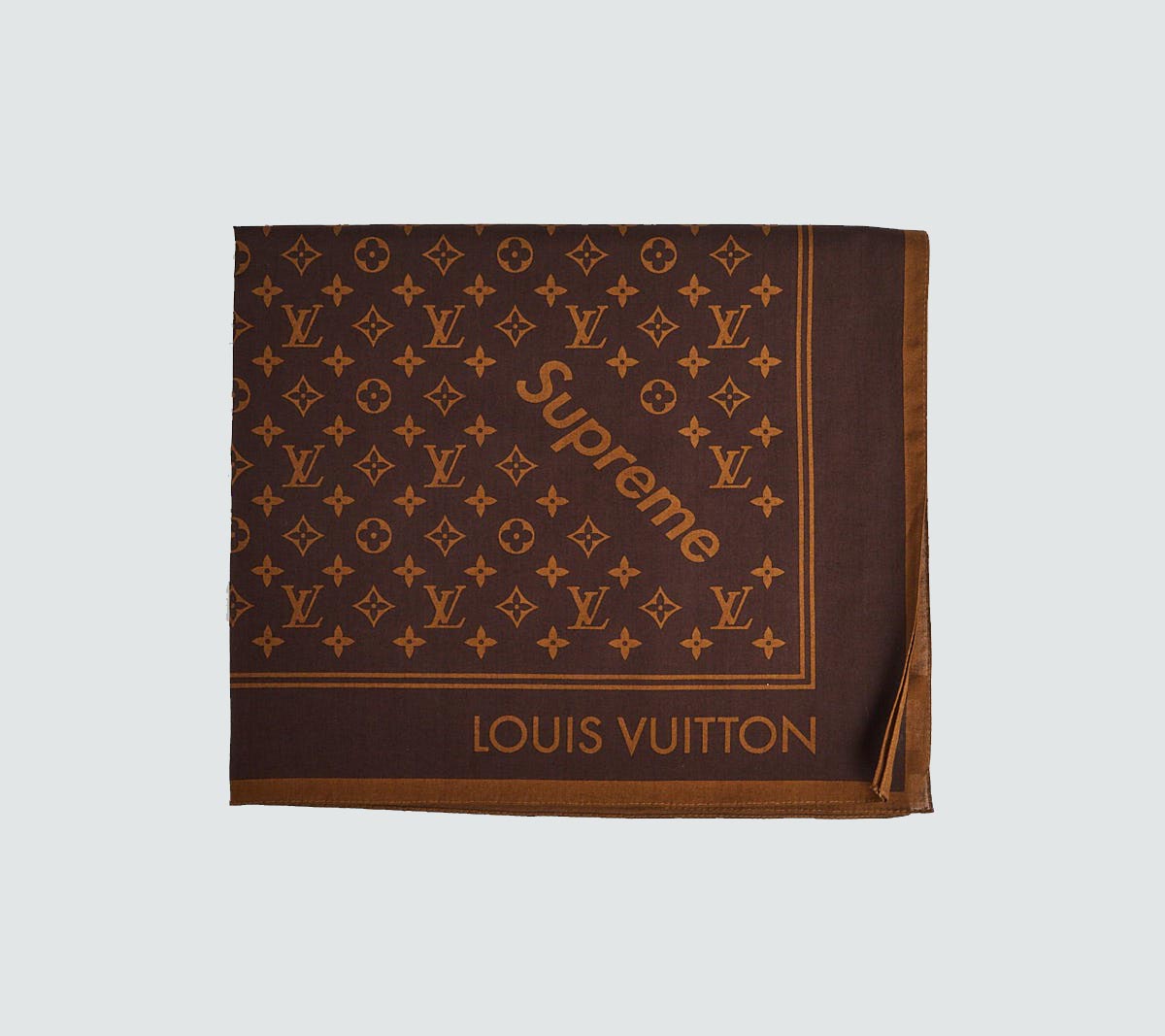 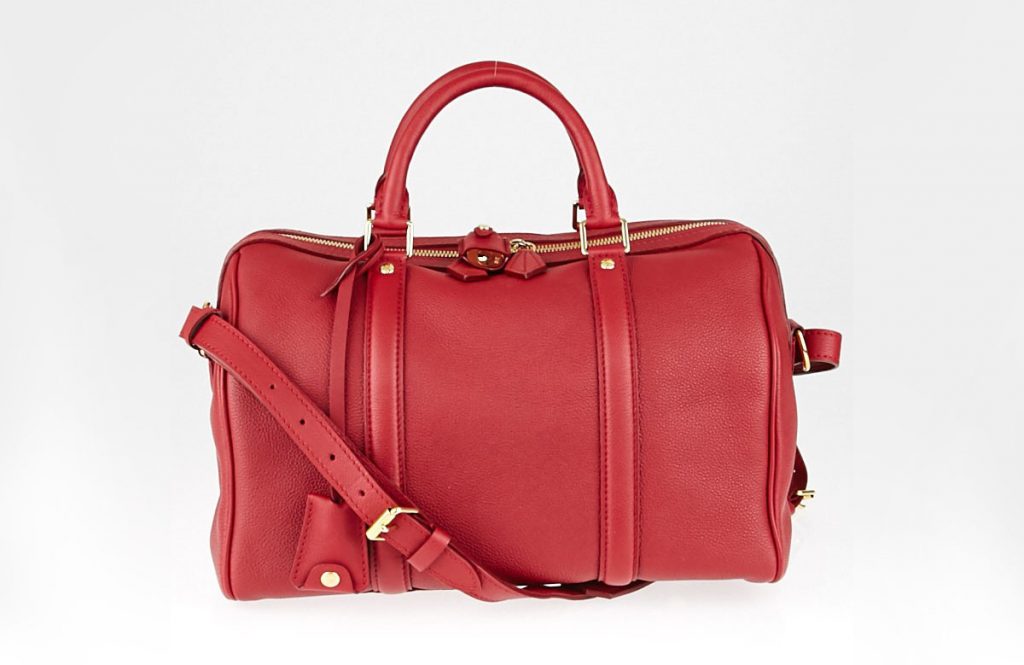 Handbags have been inspired by celebrities forever (Audrey Hepburn had the Speedy 25 designed for her, Grace Kelly had the Hermes Kelly named after her), so it’s not surprising that LV turned to one of their favorite Hollywood names, Sofia Coppola to design the bag of her dreams. Sofia Coppola, American film director, actress, producer, Academy Award-winning screenwriter, dreamed up her ideal Louis Vuitton handbag and the SC bag was born. The SC Bag was inspired by the iconic shapes of the Speedy and Keepall which combines the utility of a travel duffle with the smaller scale of an everyday bag. What stands out the most about the SC bag is the leather–luscious pebbled calfskin in a wide variety of colors. Swoon.

If you can get your hands on one of these pre-loved Limited Edition Louis Vuitton items, don’t miss your chance.

Did we miss any of your favorite collaborations? Let us know in the comments or on Facebook!