Happy Birthday Chanel 2.55 Bag!
In February, 1955, Gabrielle “Coco” Chanel released the iconic 2.55 Quilted Handbag. The 2.55 handbag would become the most widely recognizable handbag ever. To celebrate the birthday of Chanel 2.55 flap bags, we’re going to take a look back at the history of the Chanel flap bag to learn how Gabrielle’s jersey handbag became the most iconic handbag in the world.

Gabrielle “Coco” Chanel designed her first quilted jersey flap bag in 1929. The original quilted jersey bag had a rectangular twisting lock and short, all-chain straps. Her bag was carried in hand or on the arm, like most bags available to upper-class women during the era.

The First Shoulder Bag: All About Chanel 2.55 Flap Bag

Always an innovator, Gabrielle Chanel created a bag that she needed herself: an accessory which freed up the hands. In February 1955, Chanel changed handbag history forever: she introduced the 2.55 Quilted Handbag with chain straps. For the first time, it was acceptable for women to carry a bag on their shoulders. The name 2.55 is based on the date of its creation: ?2? for February, the second month of the year and ?55? for 1955.

The Chanel 2.55 Quilted Handbag came with diamond quilted leather for durability and comfort; burgundy lining stamped with Chanel’s initials inside (CC, of course); a double flap style; a rectangular “mademoiselle” twist closure; and a unique gold-plated metal all-chain strap that slipped through two metal eyelets on each side. Chanel sold the original 2.55 flap for $220. The original Chanel 2.55 bag looked a lot like this: 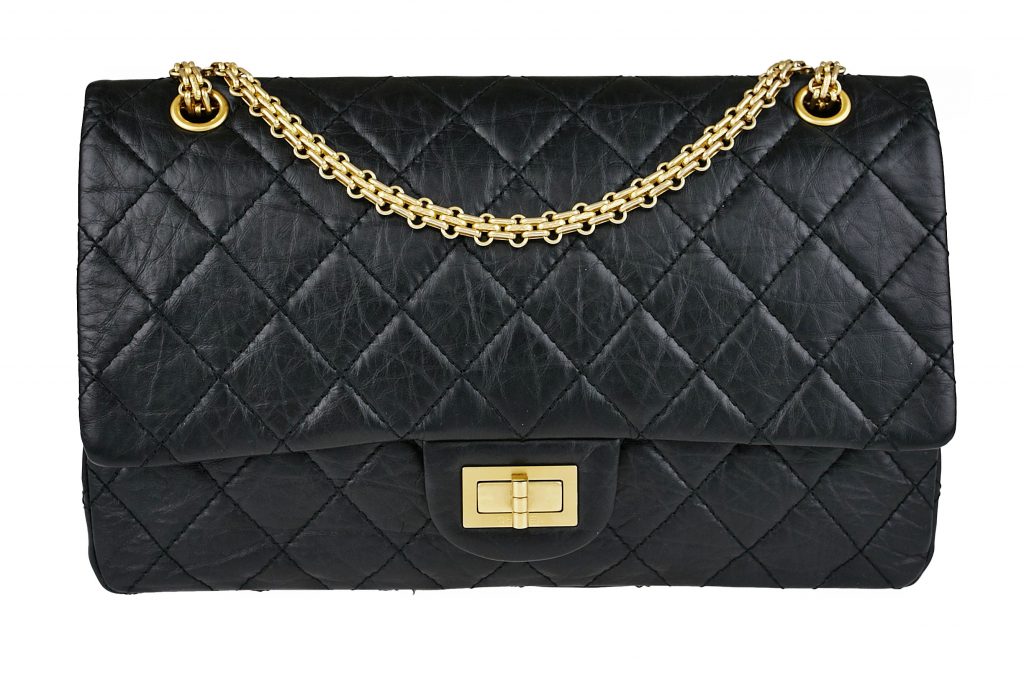 Yes, that’s right, no CC logo on the original Chanel bag! Contrary to popular belief, Chanel didn’t use her CC logo on her handbag. It was used sporadically throughout the years, but the interlocking CC logo wasn’t a mainstay until the 1980s (more on that later).

Everything Gabrielle “Coco” Chanel designed had a utilitarian purpose and meaningful significance to her own life. Do you know the reasons why Chanel added the details she did?

Exterior Material: The stitched diamond quilted pattern was inspired by equestrian accessories and the patterns Chanel saw around stables. 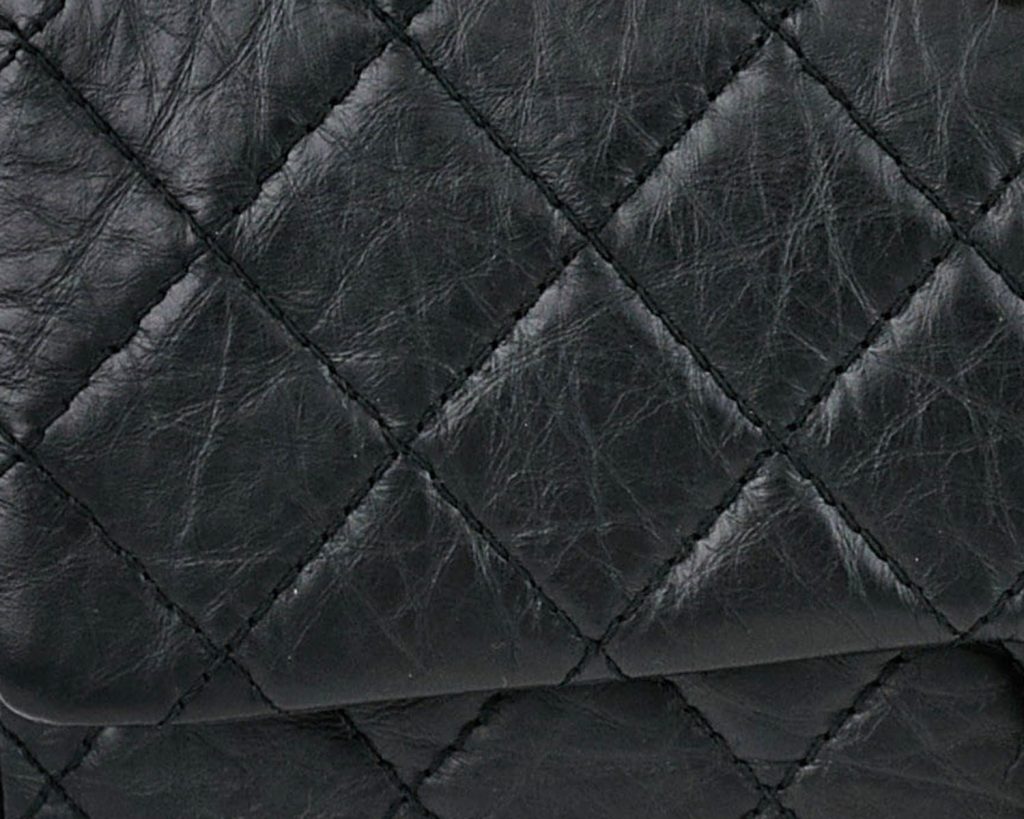 Closure/Opening: Mademoiselle, as you may know, is a name traditionally used for an unmarried woman (Coco never married). Chanel designed the rectangular Mademoiselle Lock that twists at the center to open. 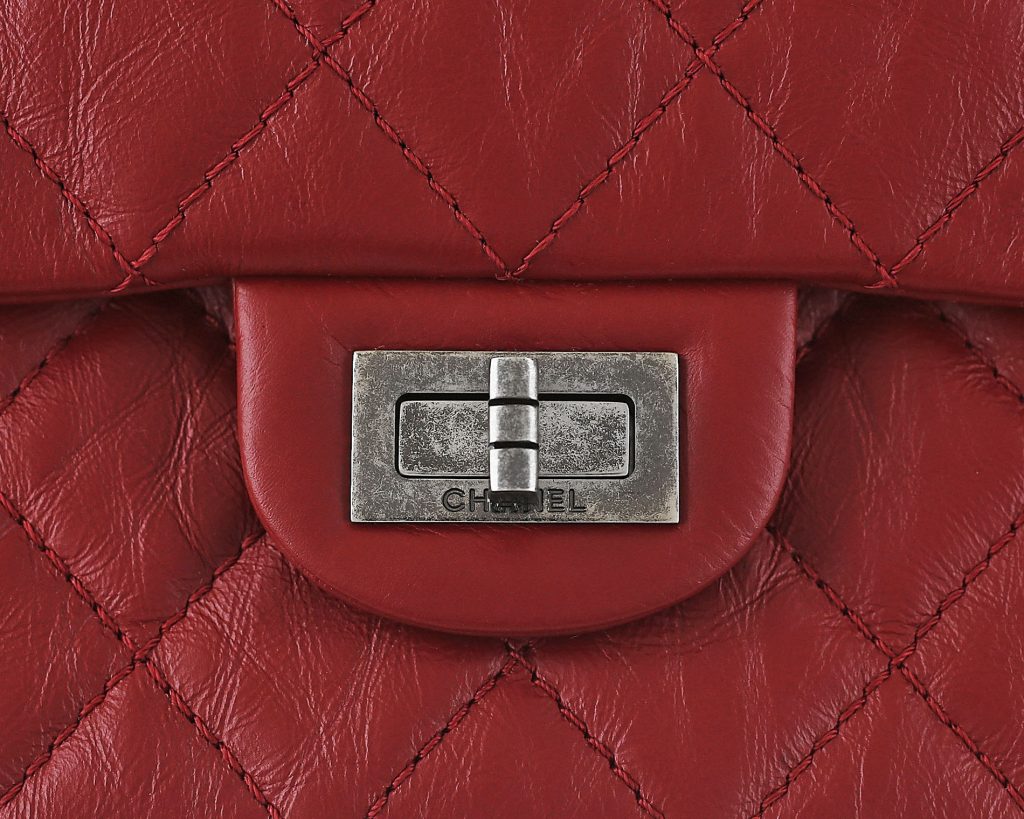 Exterior Pocket: Coco had a love for the Mona Lisa and made the back pocket reminiscent of her subtle smile, which is said to be for loose change for tipping. 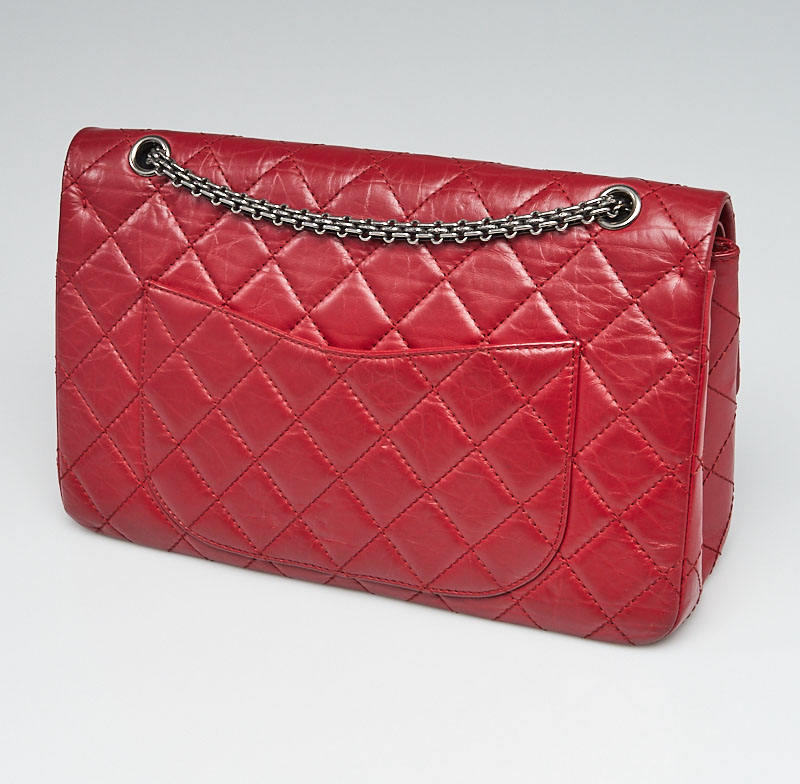 Interior: The 2.55 bag has a double flap style. Under the top flap, there is little zipper compartment; legend has it that Chanel hid it there to have a secret spot to stash her love letters. The main interior has an outer flat pocket, and inside there are two flat pockets, and one small pocket that’s perfect for lipstick. 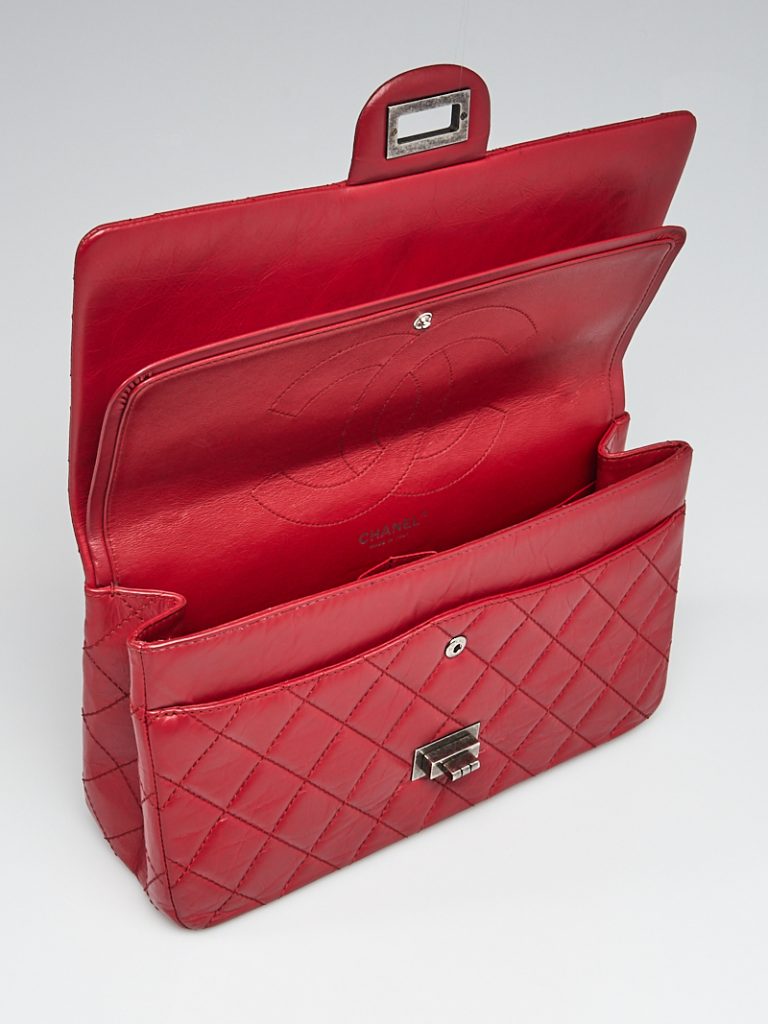 Interior Lining: The burgundy/garnet leather in the original 2.55 was the color of the uniform that Chanel had to wear at the Aubazine orphanage where she was raised. 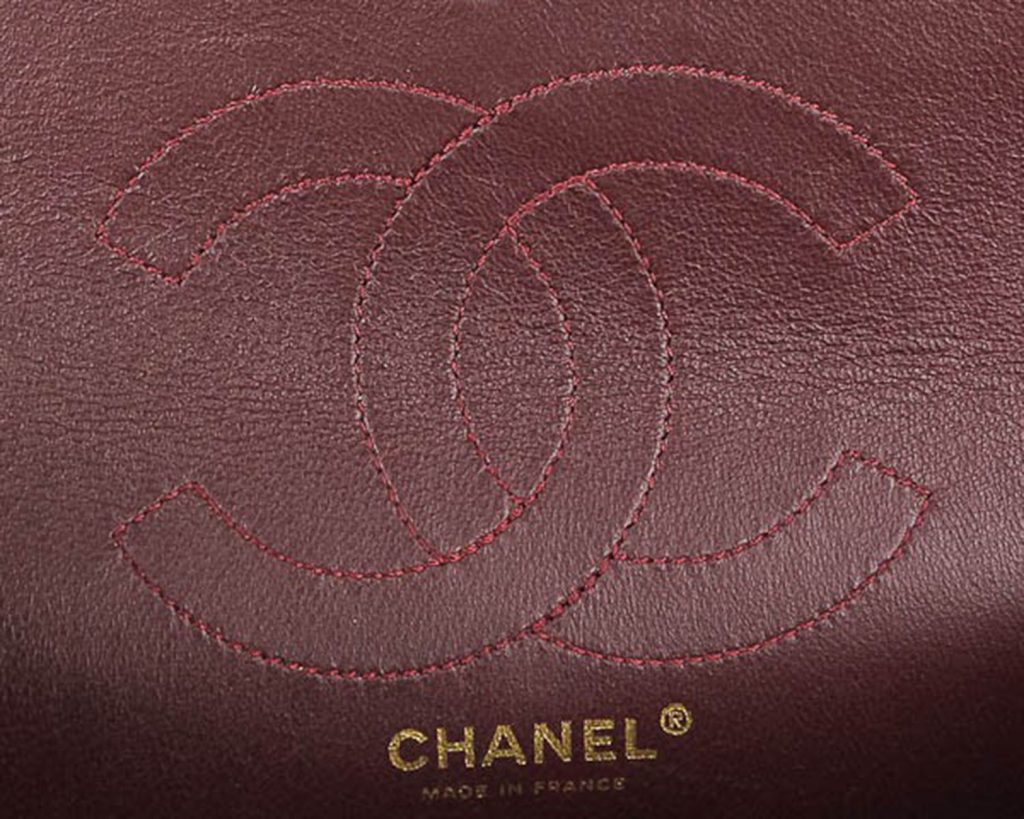 Handles/Strap: Chanel invented a new style of shoulder strap inspired by men’s military satchels, who wore them across their chest. The gold-linking all metal chain was light yet strong, wearable on the shoulder or across the chest, so that a woman’s hands could remain free. It’s also said that the double-chain shoulder strap was inspired by the caretakers at the orphanage Gabrielle grew up in. She chose the same chains that the nuns used to dangle keys from their waists. Regardless of the origin, Chanel wanted the chain straps to look like jewelry with the convenience of a satchel for the modern woman. 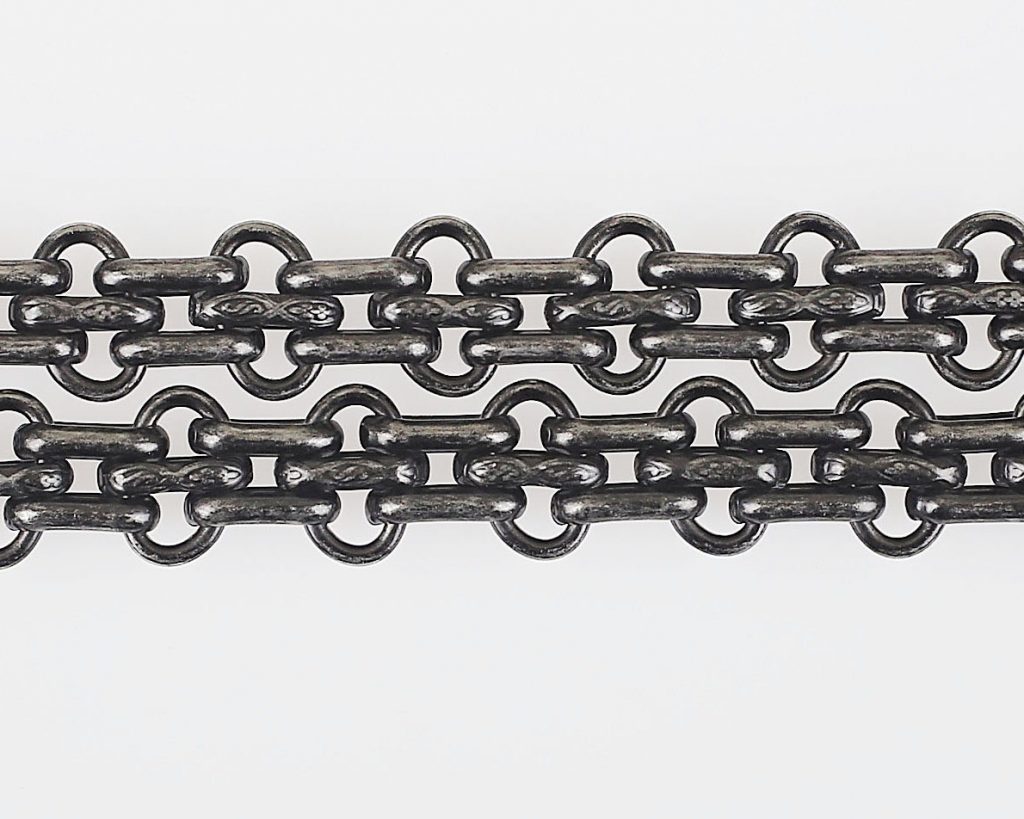 Chanel’s first bags had all-chain straps, but during the war while material was scarce, Chanel created in a strap with chain interwoven with leather ribbon. Over the years, the original Chanel 2.55 has been modified with different locks, (i.e. different styles of the CC and mademoiselle lock), the leather, the flaps, and the straps.

By the 1970s and 1980s, the Mademoiselle lock was phased out in favor of the interlocking CC closure.

What Is A Chanel 2.55 Anniversary Reissue?

In February 2005, for the 50th Anniversary of the Chanel 2.55 bag, Karl Lagerfeld created the 2.55 Reissue with a design that was as close to the original bag created by Coco Chanel as possible. This lead to the reincorporation of the Mademoiselle lock, the original lock that Chanel bags were designed with. 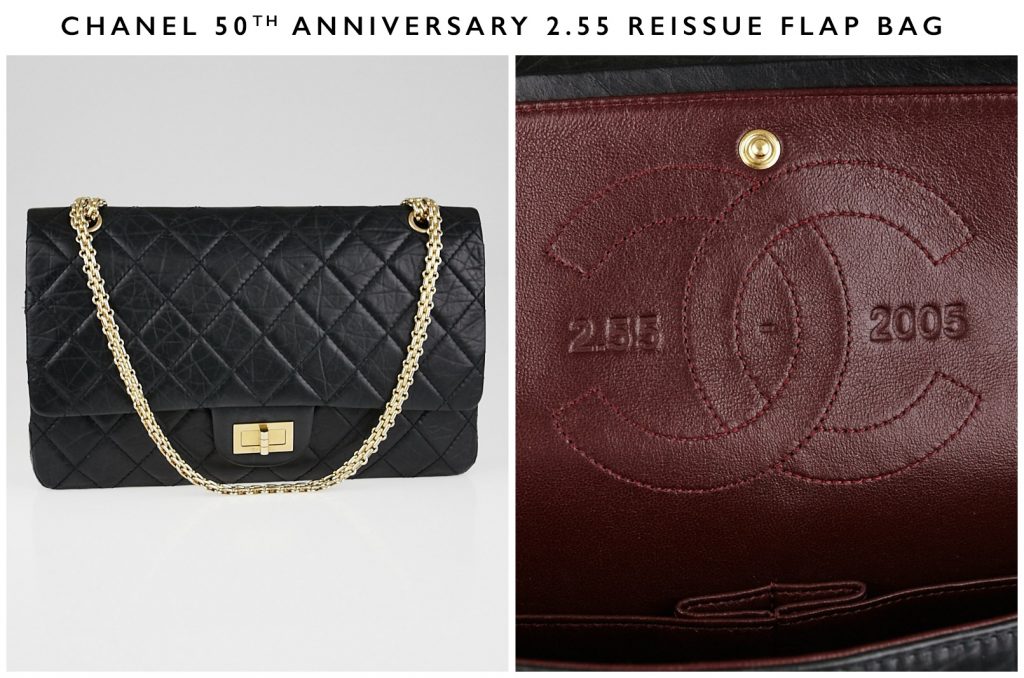 The ultra-rare Chanel Limited Edition 50th Anniversary 2.55 Reissue bags came with the Mademoiselle Lock, quilted calfskin leather, and special 2.55-2005 markings stitched on the underside of the flap. The 2005 Commemorative Reissue was available in three colors (black with gold hardware, grey with silver hardware, and white with silver hardware) and 5 sizes: 224, 225, 226, 227, 228. 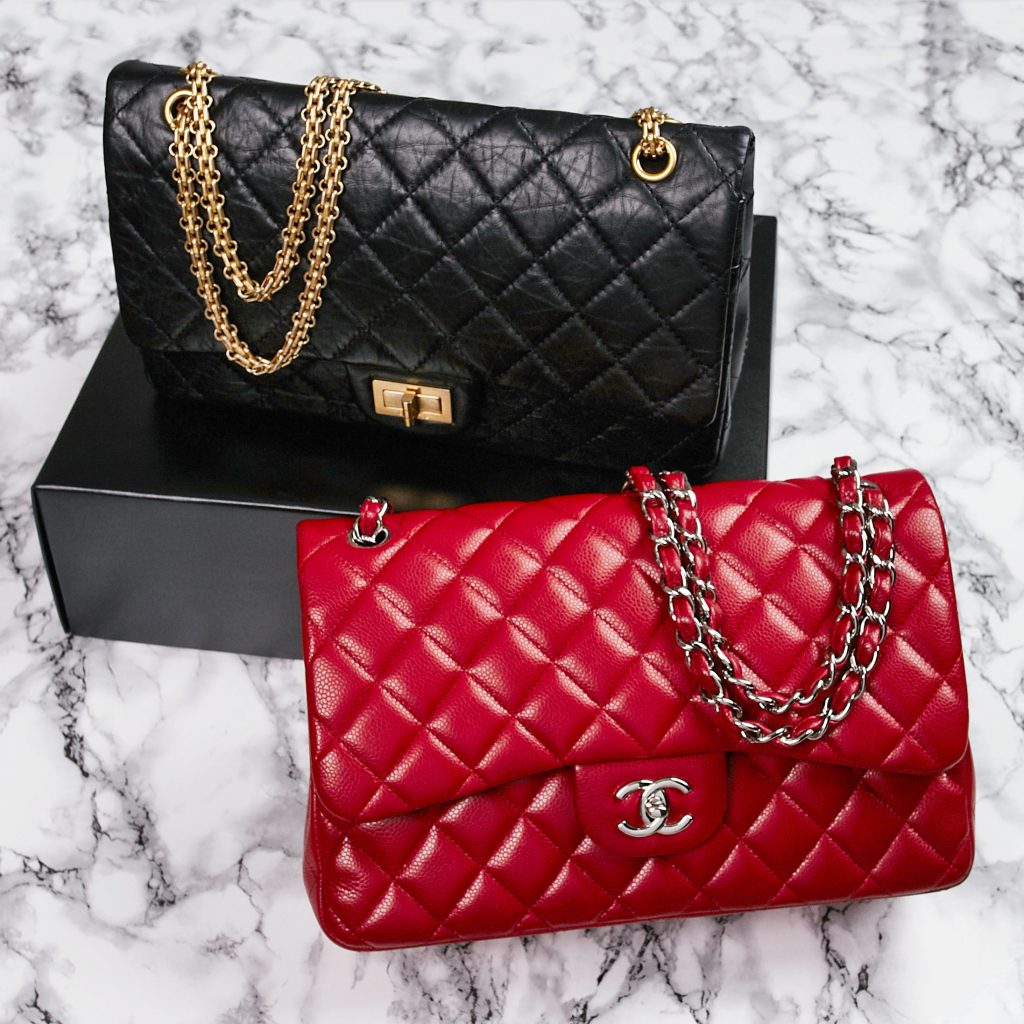 The house of Chanel and Chanel boutiques refer to their two most popular bags as “Iconic” with the “2.55 Handbag” and “Classic” as different styles. At Chanel, the term 2.55 refers to all flap-style bags that have all chain straps and the mademoiselle lock, while term Classic flap commonly refers to the flap with the the leather interwoven chain and interlocking CC closure.

While technically the term “Reissue 2.55” should only be used for the bags that were made in 2005, many handbag collectors (and Yoogi’s Closet) refer to all flap bags that resemble the original 2.55 with the Mademoiselle lock/straps as “Reissue”, and all flap bags that have the interlocking CCs and leather/chain straps as “Classic”. From 1955-2005, Chanel created bags that had a combinations of the two styles, which are now vintage and very hard to find.

all chain-link straps with a rectangular twist-lock

If you’re looking to buy a Chanel Classic Flap bag or a Reissue 2.55 but can’t decide which style or size is right for you, reference this chart: 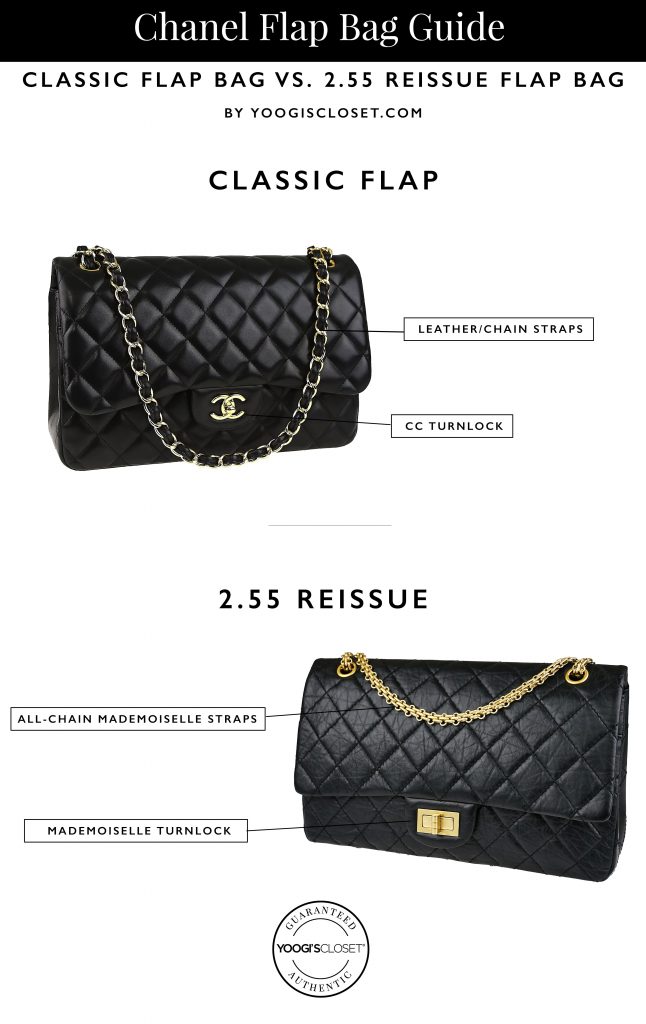 Happy Birthday to one of our favorite iconic handbags, the Chanel flap bag. Without you, our world would be much different.

Which style Chanel flap bag do you like better? Reissue 2.55 or Classic? Do you have a vintage Chanel bag? ?Let us know in the comments!

1 thought on “The REAL Story Behind The Chanel 2.55 Flap Bag”